You probably know that Mordenkainen was Gary Gygax’s character, and you’ve probably heard about the evil laughing Tasha, but what about the Eight?

After any time with Dungeons & Dragons you will encounter these names in the lore of the game. Turns out they aren’t just scrambled nonsense names to make it look mystical, but they are all part of a group with a long backstory:

Circle of Eight / Citadel of Eight 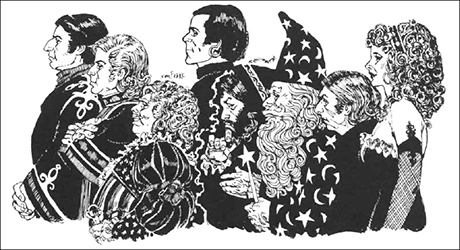 You have your D&D group name and you’ve heard of many legendary ones online, but at the time when D&D was starting, this was the legendary D&D group. Gary Gygax and his pals made this group and, like any other group, it went through a lot of members and characters. The lore and backstory of this group spans people’s lifetimes of gaming D&D and they left their marks in the game we all play now.

Although born in the Greyhawk campaign setting and gone through the grinding mill of legal battles, these names have pervaded history and time. Here’s a prominent eight to take note of:

An anagram of “Ernest”, Tenser is one of the first two characters to ever play D&D as Tenser was played by Gary’s son. The other character, played by Elise Gygax, is not known. If it was Mordenkainen leading the group, it seems that Tenser was the lawful good wizard leader of the Eight.

An evil wizard played by Gary Gyga’x friend and coworker Rob Kuntz, Bigby had an interesting arc with Gary’s character. Gary, while playing as his character Mordenkainen, charmed Bigby and maintained the charm until he could persuade Bigby away from his evil motives and join the circle. Sounds like a fun campaign of character development where the antagonist eventually becomes a close ally!

You and your D&D party have likely subdued an npc and brought them into your ranks as an ally and friend. Otto was that character for the Circle of Eight, persuaded by Tenser, Gary’s son, to join the group. Deceptively skilled, Otto was a talent wizard and cleric too.

Spell backwards, Drawmij is the name “Jim Ward” who was a coworker. We’ve also all had a moment where you improvise a new homebrew rule or spell to fit the game; when Jim had realized that his character forgot to bring a magical item with him on his journey, he persuaded Gary that wizards ought to have some ability to recollect it magically. Hence, instant summons.

Sometimes we meet someone outside of our gaming group and they inspire us to the point where we make them in our game! Although there is some debate over Nystul’s origin, it seems that it is inspired by a magician named Brad Nystul who Gary met. They apparently discussed spell ideas and, because of that inspirational talk, Gary brought the wizard into the campaign story!

Also known as Rary the Traitor, this character was the ally turned enemy, killing Tenser and Otiluke. They went to establish a large antagonistic force for the campaign setting: the Empire of the Bright Lands.

Likely the goof of the group, this is the character in the party who takes a cursed item and uses it unironically for the rest of the campaign. In this case, gauntlets of kobold power. While described as not very intelligent or wise, they definitely had the wealth of wizardry abilities.

The only female member of the Eight, Jallarzi and her pseudodragon Edwina became close friends with Tenser to join the group. She was also the youngest member of the group.