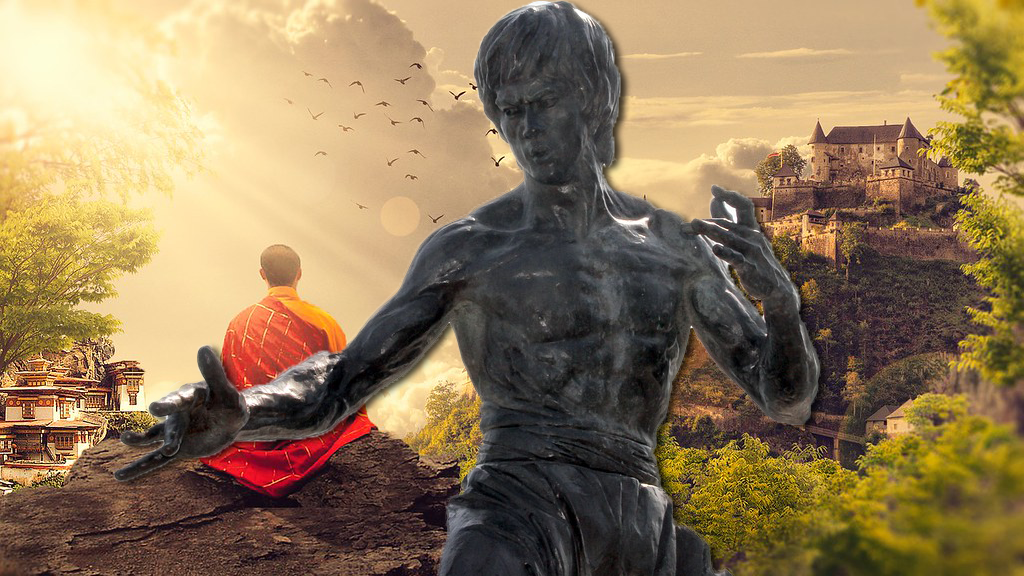 Disciplines dedicated to martial arts have philosophical foundations which are manifested in physical form; how you treat your body and the body of others ought to be done with deliberate intention and careful thought. It’s important to practice, as much as possible, so that you can react quickly in tense situations, but to react in accordance to your philosohical discpline.

Monastic traditions are more than kicks, punches, catching arrows, and looking cool, but trying to interpret and understand the full depths of these traditions. Understanding this can take a life time – which is precisely why some people give up all their possessions to dedicate their lives to an order!

But you’re just playing a game, and just want to get a peak into what these traditions are supposed to represent.

D&D 5E has many sub-classes to choose from, spanning several core books. Here are some quick summaries of each Monk subclass, which will give a bit of insight to the theme, generalized game mechanics, and the likely play style to expect. This list isn’t the way you are expected to play the subclass, but our own interpretation of what the subclass archetype is trying to be. Your interpretation may differ, and if it does, please share how!

Way of the Open Hand (PHB)

Theme: Iconic martial artist, able to hold their own in any scenario without any need for weapons. Heavily inspired by Dim-Mak – the martial art of using an opponents pressure points against them.

Game Mechanics: Additional effects can be added to your flurry of blows which can allow you to trip your enemies, knock them prone, or prevent them from using reactions. Later levels gain ability to heal, cast a spell-like effect to prevent enemies from targeting you with attacks, and eventually gain an attack which can kill a target days after the attack is made.

Play-style: You want your body to be the only weapon and the only armor that your character needs. You are equally powerful clothed and naked.

Theme: Like a whisper in the wind, this monk moves with darkness to become just another shadow. Practicing the art of invisibility without the need of magic, the shadow monk is an artist of deceiving their opponents senses.

Game Mechanics: Able to cast spell-like abilities similar to darkness, pass without a trace, silence, and minor illusion. At later levels, you’re able to teleport between shadows and can eventually turn invisible when entering a shadow. Their last ability gained is to make attacks as a reaction when allies are targeted next to you.

Play-style: Arguably the most ninja-like choice. You love to be a dangerous figure in the dark who waits for their chance to act, either with blade or fist, and then disappearing as quickly as they came.

Way of the Four Elements (PHB)

Theme: Aligned with nature, the Elemental Monk sees themselves as part of the world and working with it to find varying degrees of balance.

Game Mechanics: Able to use Ki points to cast various elemental spells and a few custom abilities, such as a water whips and fire snakes. Starts off with a custom cantrip to manipulate the various elements.

Play-style: You like passive abilities which manipulate the elements and love the idea of a character who is connected to nature.

Way of the Long Death (SCAG)

Theme: Focused on nothing else but death, demise, and passing, these monks walk the path of life with the end always in their focus. Their obsessive-like focus of death can either be a source of intimidation or compassion.

Game Mechanics: Gain health from killing opponents. As an action, frighten opponents in your area. At later levels, they can go to 1HP instead of becoming unconscious. Their last ability is to channel death itself into a punch, causing significant amounts of damage which scales to amount of ki points spent.

Way of the Drunken Master (XG)

Theme: A complete facade, the drunken master uses the art of being underestimated. Opponents are never certain if the drunken monk is deliberately falling or not. This monk, though, is definitely always in control.

Game Mechanics: Gains additional skills in performance and brewing. Flurry of Blows gets additional effect to disengage, with an additional 10 ft. of movement. Later levels allows this monk to get up from being prone faster, and to redirect an enemies missed attack against your desired target. Their late abilities allow them to remove disadvantaged rolls, and add more attacks as part of the flurry of blows.

Play-style: You want to have a good time in combat, if not mock it. Drunken-like behaviour is a great way to break tension and a fun way to bring opponents’ defenses down. Combat doesn’t have to be serious – it can be an opportunity for a good time.

Way of the Kensei (XG)

Theme: These monks wield their weapons just like their own body: expertly attuned to every inch of their strengths and flaws, and understand how to best utilize them in any scenario.

Game Mechanics: Able to use non-Monk weapons, including the longbow, and gain additional weapon choices as they level. Weapon of choice can give AC bonus if not used in an attack. Later levels enhance your weapon to do additional damage and be magical. Their late abilities allow them to add ki points to their weapons attack and damage, and to turn a missed attack into a reroll.

Play-style: Martial arts are great and all, but combat would be much better if you could throw a weapon into the mix.

Theme: Summoning their own ki energy as a weapon, these monks train on how to send their energy in an outward burst to defeat their opponents.

Game Mechanics: Gains the ability to make a ranged attack in the form of focused ki energy. This ranged attack can later be turned into a spell-like equivalent to burning hands, which is an area of effect attack. At late levels, this monk can create an orb of searing energy which will cause damage in a large radius. Lastly, this monk eventually radiates energy itself which causes damage to anyone who attacks them.

Play-style: You enjoy the close-combat of martial arts, but you also want to be able to attack from afar. You are a monk purist, and don’t want to rely on weapons for ranged attacks.

Way of the Ascendant Dragon (FTD)

Game Mechanics: You start off with several benefits, such as being able to re-roll failed intimidation or persuasion checks, change the type of damage for your unarmed strikes (eg. acid, cold, fire, lightning, or poison), and learn how to speak Draconic. You also start off being able to exhale dragon breath. At level 6, you can temporarily fly when using the Step of the Wind ability. At level 11, you can create an aura that is either frightening to enemies, or grants resistance to you and allies. Finally, at level 17, your breath’s effectiveness is increased, you gain blindsight, and your aura ability can damage enemies.

Play-style: You like the idea of playing a Bruce Lee like character, and want to be able to have actual dragon breath.